How to install Android apps on Windows 7 ← BLOG404

How to install Android apps on Windows 7 5

Many of us now have android powered smartphones and we all have become super addicted to Android apps . We would certainly love to use them on more platforms than just our smartphone , right ? But then these apps cannot be installed on other operating systems other than Droid .

And then there comes BlueStacks !

Bluestacks is an appplayer program that allows users to run Android Apps on a PC (currently supports XP, Vista, and Windows 7). What’s cool is that its completely free [because it’s in apha ] and emulates apps just like in our smartphones .Well ,it sure is worthwhile to run Android apps on a desktop PC in order to test and develop android apps or just to play your favorite games on the big screen .
Android apps will run only in the full screen, so that this app will display amazingly on your PC. Even though Android apps are designed to run with your touch, mouse and keyboard can make this app to run pretty well.At the bottom, you have Menu, Rotate, Zoom and All Apps buttons in the center with app navigation and close buttons at either side. The Zoom button switches between full-screen and standard view modes. Clicking the All Apps button will show the BlueStacks gadget with the App Tray.
It also includes the icon to Get More Apps. When you click on it, it will open the browser and access the Cloud Connect website.

How to make it work?

The installer is 116MB in size, which is pretty nice, keeping in mind the functionality of the software. You need to install and run BlueStacks on your PC .It comes with 10 pre-loaded apps and you can install and sync up to 26 additional titles. Another interesting feature is the BlueStacks Cloud Connect feature . It’s an android app which you should install on your Android device. From there simply open BlueStacks Cloud Connect app and select which apps you want to sync with your PC.

BlueStacks Channels is like an Android marketplace made by BlueStacks for their App Player. Here, when you subscribe for a particular app, it gets installed on your App Player almost instantly. The only thing which’s lame is that it has a very limited collection of Apps to offer its users; although that problem gets solved with the Cloud Connect App, it is a dead-end for users who want to use Android Apps before or without buying a device. 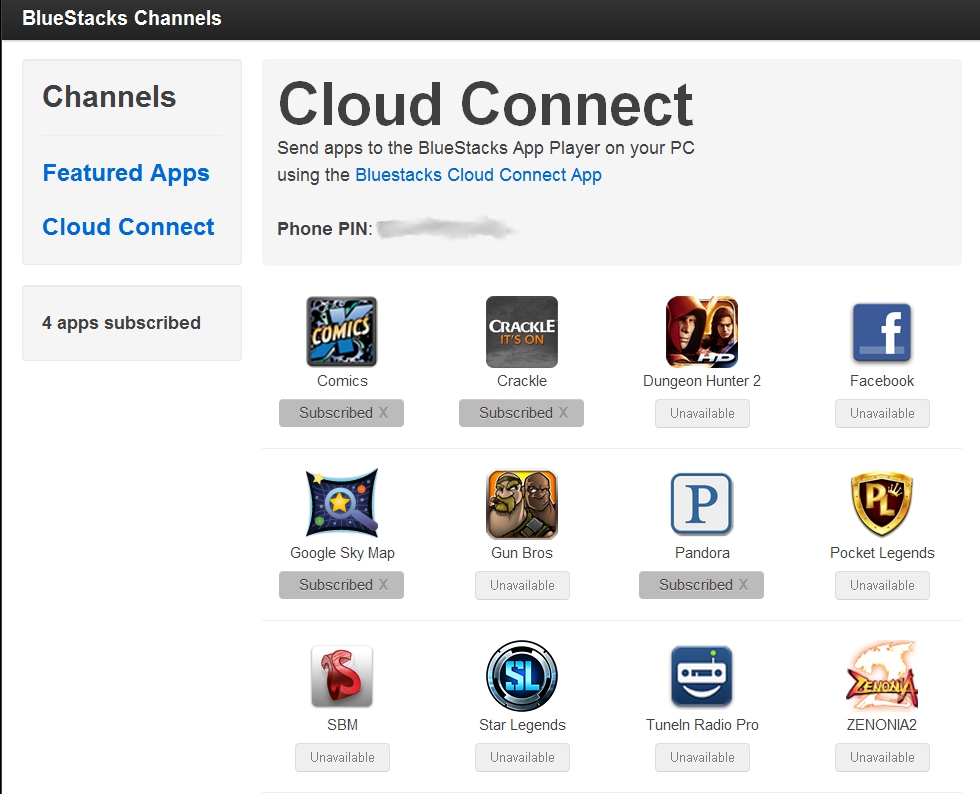 Yes ,BlueStacks has an app for Android devices that lets you install the apps that are already installed on your phone on to your App Player, keeping them in sync. In order to use this app,what you need to do is to first need to sign-up at BlueStacks Channels and get a PIN code. Once you enter that PIN code in the Cloud Connect App and you will be ready to sync your apps to your App Player. Once the Cloud Connect has successfully connected to the App Player on your computer, you will get a notification on your PC that the App Player is ready. You will be presented a list of apps on your device that you can sync with the App Player on your Computer. Select the apps and hit the sync button and the Apps will be installed on the App Player one by one.You need to wait only for a few minutes in order to sync the apps on your PC. When it is done, you can see that a small window pops up to notify that each of the app is installed successfully and you can use it already. Though Bluestacks Player and Cloud Connect are in alpha,the are actually pretty stable, so that there wont be a lot of problems.

Most apps I tried worked fine, with a few exceptions. Facebook for Android , Gmail and some games like angry birds and fruit ninja indicate they will only run on a Pro version of Bluestacks that is scheduled for the future.The free version will be limited to only allow you to install 26 apps, while the pro version lets you install as many as you like .

Overall I find BlueStacks to be one of its 1st kind to provide compatibility with other platforms . It provides new users (and users who want to try Android out before buying a device) with a great way to test apps.Indeed a great fun to test out compact apps on giant screen 😀

5 thoughts on “How to install Android apps on Windows 7”