Apple recently had a special event and launched iPhone6 Plus, to join the big Phablet league. Samsung recently updated the Galaxy Note series with the addition of new phablet Galaxy Note 4. Here’s a comparison of Apple iPhone6 Plus with one of the hottest phablet in the market- Samsung Galaxy Note 4. 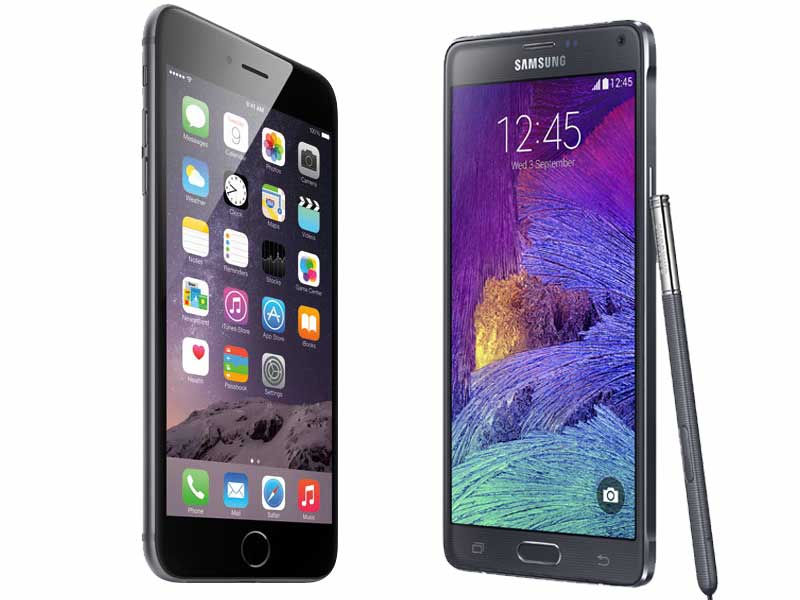 iPhone6 Plus has 5.5-inch Retina HD display (1,920 x 1,080 pixels). ALso there’s an improved polarizer and photo alignment with IPS liquid crystal with ultra-thin backlighting.
The Note 4 has a 5.7-inch Super AMOLED display (2,560 x 1,440 pixels).
Side note, Apple boasts iPhone6 Plus can now work in horizontal mode, which the Note 4 can obviously do as well, but it seems that this is a breakthrough for Apple.
Winner: Note 4

iPhone6 Plus has Apple A8 chip with 1GB RAM and 64-bit architecture and M8 motion coprocessor that uses an advanced 20-nanometer process and is faster with more energy efficient compared to the A7. Apple optimises iOS for its devices so the clock speed and RAM won’t matter much. iPhone6 Plus comes in 16GB, 64GB and 128GB storage variants.
Note 4 comes with Quad-core Qualcomm Snapdragon 805, clocked at 2.7 GHz (Not 64-bit). Nevertheless, the Note 4 processor is very powerful and it has 3 GB of RAM, 32GB internal storage with microSD card slot for expansion. The Note 4 also comes with a fast charging feature.
Winner: Difficult to tell. So both win!

Apple has not increased the resolution of rear camera sensor, sticking to 8MP. iPhone6 Plus comes with optical image stabilization, just like the Note 4, taking its already good camera hardware to the next level. It can take 43MP Panorama shots and record 60fps normal video and 240fps slo-mo video. It sports a 1.2MP front camera and comes with a burst mode.
Note 4 offers a 16MP rear camera plus it comes with 4K video recording while the iPhone 6 Plus camera is limited to full-HD. It features a 3.7MP front camera.
Winner: Again Both win.

iPhone6 plus looks premium with anodized aluminium body & stainless steel buttons.It features rounded edges and is significantly thinner than the Note4. It’s 7.1mm thick, against the Note 4’s 8.5mm.
Samsung has added jazz to the Note 4 by adding a metal strip to the edge of the phone, replacing the plastic that used to feel cheap.However, it doesn’t quite catch up with the new iPhone 6 Plus. The Note 4 has an important feature the iPhone 6 Plus lacks too – the S Pen which offers pressure sensitivity and a wonderful writing/note taking experience.
Winner: iPhone6 Plus.

iPhone6 Plus runs Apple’s own iOS 8 and it now features a landscape mode to access the home screen and offer additional app capabilities.
Galaxy Note 4 has Android 4.4.4 with TouchWiz (and Android 5.0/L when Google releases it). It comes with a custom TouchWiz UI running on top. The phone includes all software features of Galaxy S5, in addition features the S Pen stylus that provides a wonderful Multi-tasking experience.
Winner: Note 4.

As you might expect we have a winner: Samsung Galaxy Note 4 hands down. Both the phablets have a fingerprint scanner integrated into the home button. The Galaxy Note 4 also has a heart rate monitor placed at the back just below the camera which is missing on the iPhone6 Plus. As for pricing, the iPhone6 Plus is priced at $749 for the 16GB variant. The phablet will go on sale in the US on September 19. Samsung though hasn’t revealed the pricing or launch plans for its Galaxy Note 4 phablet. Both the phablets have plenty to offer the phablet loving crowd, and it could all boil down to the choice of operating system.