Everytime Facebook changes its design,there is a collective outcry from the addicted masses complaining the site’s new look. Facebook Timeline — the latest update from Facebook which has completely given a new look to profile design is now rolled out to everyone. Timeline was released throughout September of this 2011 and also advertised since “an uncomplicated way to uncover what exactly you shared, as well as acquire your best instances in a single place.” It may be recognized and criticized through consumers as well as solitude supporters alike. But Timeline is different from previous updates, Timeline lets them be a designer 😉

The huge change in Timeline profiles is the giant photo that goes at the top of your profile, separate from your profile picture. It’s called a cover, and it is the height of creativity that Facebook has ever permitted in its frequently stiff design. Along with the cover photo, Timeline helps you sort through the actions of your life online — and offline, too – to make a sort of curated Web scrapbook. You can highlight your college graduation, new job or marriage, and you can also hide those photos you had rather your friends not see. The most strange thing added is that “You can even add photos and actions from before Facebook existed” 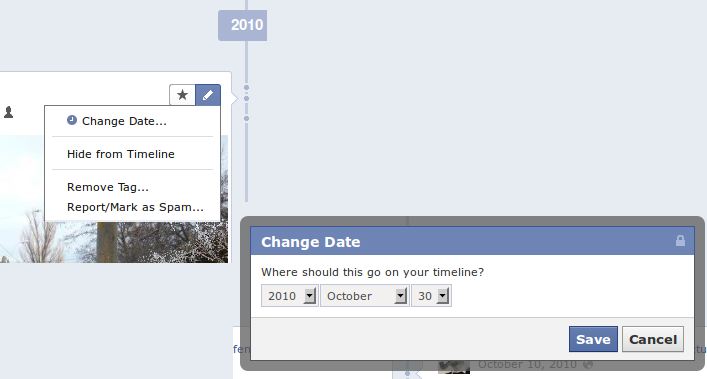 Option to change the data of Photos and Videos

Timeline is, as one might expect by the name, a chronological, visual story of your life, as Facebook has recorded it (or as you choose to tell it). Facebook users can get Timeline on their profile by clicking the Get Timeline link and start curating it. Once done, users will have a seven-day review period during which it won’t be visible to anyone else. They can make it go live manually or it will automatically go live once the review period ends. Here is more about it .

Its kind of hybrid between a visual blog and online scrapbook, somewhat inspired from twitter and old MySpace .It’s more a rearrangement and different display of the information that’s already in Facebook in a new User Interface . You can add more detailed information that you might not have had before, like your photos from childhood  ,  birthday (with year),  and other memories that could fill in the gap between the day you were born and the beginning of your life on Facebook. 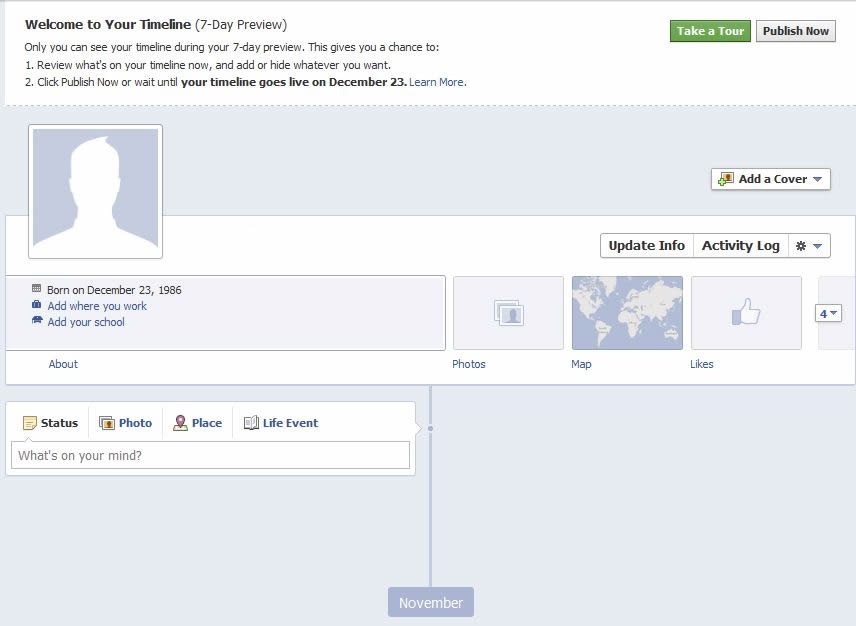 I find it funny that Facebook has named the giant leading image on any Timeline page the “cover image.” It’s a large splash photo that you can change at any time, but is not your profile picture, which I like. You can choose any photo to represent you or your life without it being the picture people see of you. This is a welcomed addition. I get the sense that many people want to make their profile picture some image the captures how they’re feeling or what they’re excited to share at the moment, rather than a picture of their face. I have no problem with creative profile pictures, but there actually is a breakdown in the mechanics of Facebook when you can’t identify your friends by sight . Many people will now upload some nonsense or scenery image which is a FAIL . Even i find it irritating and painful to stare blankly at pictures of quotes, movie posters of twilight , groups of people on a stage, and cartoon images of spongebob .

Cover Image size to use FB timeline
It is good to use 850px wide and 315px height high quality resolution image which will fit perfectly.

If you try a larger image to put on your cover page than Facebook will give and option to crop that image.

The dimensions for the cover image are very unconventional, and I found that I didn’t like how most of my images looked when I uploaded them without manipulating their size and cropping them significantly. It’s also a large space to fill, so higher-resolution photos work best. You can drag an image around the viewer space .

Status updates, photos, friendships made, as well as job history, marital status changes, and other information that you’ve recorded in your profile ! Yes , even Relationship Status updates can be seen once someone decides to spy your facebook life . I can say facebook has made stalking easier 😀 Timeline solves one big Facebook issue: the matter of it being too in-the-moment. Timeline is structured in a way that lets you more easily scan and look for the information you want. 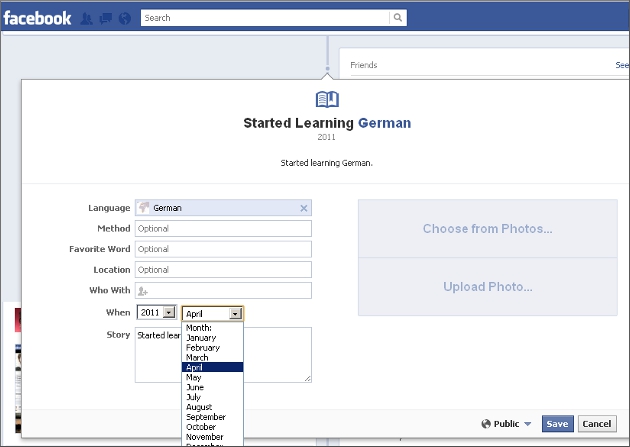 Timeline creates a record of events, changes, and other activity, and makes it easier to read or comment on slightly outdated (or even very old) activity by person and time, so if other factors are what trigger your memory, it’s still quite difficult to find older posts.

I must admit that I dint like playing with Facebook Timeline . I customized old Facebook by adding 5 creative banners of tagged pics but it took only 1 minute to customize my Facebook cover thanks to already available tools to pick and update your FB cover ! However with Timeline, you face a huge envelope of data that you have already created, and now you are tasked with making sure it’s all appropriate and what you want the world to see. If it isn’t then you better waster an hour or half to make set it right .You can change  permissions at any time, deleting or hiding images you don’t want everyone to see, rotating out the cover image, and so forth.

Tricks and Tips for your Cover Pic