Now Upload Images on Twitter , thanks to PhotoBucket ← BLOG404

If you still tweet from smartphone or desktop clients , then its time you open the web version of twitter o check out the new Twitter feature . Yes ! Twitter has finally unveiled its new photo service and it’s a pretty different from what most people expected. Normally, users had to upload photos to thiriod-party services like twitpic , yfrog etc and insert the links in the tweets. That required several steps and moving between a couple of sites .

When writing a new tweet, users will now get the option of uploading a photo . The pic is uploaded to the Photobucket servers, but the process is completely opaque to the user, everything happens on Twitter . 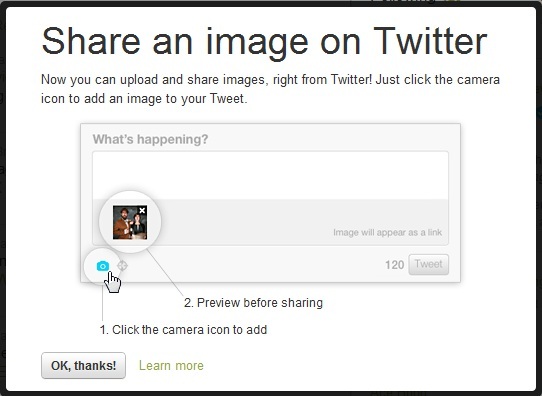 Twitter has officially started to roll out their image upload option for those that post directly from the Web. Currently users can upload images up to 3 MB or smaller, and it will be hosted by Photobucket. When you upload the image, a small thumbnail preview will appear below the text field for your tweet.

Also , Twitter also has done away with their old version of the website, so users can view these uploaded images in their stream by clicking on the tweet . According to Twitter’s detail page for this new feature :

Other third-party image hosts like Twitpic will still function the same way. In the future Twitter will be adding a gallery feature for these images, and supposedly it will include these third-party images as well. Currently images are only on an individual basis, and are directly connected to the tweet.If you delete a tweet, the hosted image will also be deleted. However, if you protect your account (blocks the public from viewing your tweets) any previously public images will result in a 404 error.

When was the last time you actually used Photobucket ? I havnt used it when i came to know about the big players – twitpic , yfrog . Even though i wouldnt tweet those images , i used to sign in via twitter and use the image link and give to others . Still , Photobucket hosts around 8.5 billion files with an average size of 85K, and serves three to four billion photos every day. Adding Twitter photos will have giant impact . This doesn’t mean twitter acquired photobucket , it will just use their server for image storage . I guess Twitter would surely have approached yfrog and twitpic ,but then merging with them would result in loss of traffic and income for these photo sharing services . Photobucket initially did not actually let you upload and tweet to your twitter directly and that’s why , it might have partnered with twitter .

Twitter is going to be heavily integrated with Apple’s iOS 5, the operating system for iPhone, iPad and iPod Touch and this will be one of the reason to compete  . And i expect Twitter will also be allowing third-party developers to access the API for this feature in the future. I can see a lot of possibilities with more interactive marketing campaigns

The only issue I currently see with this feature, is that you are limited to uploading one photo at a time 🙁  Some mobile apps for Twitter allow you to upload several pieces of media at the same time.

Twitter also announced that it will enable users to send photos from their phones via MMS, as soon as it’s done signing partnerships with carriers around the world. Now tweets would be more fun 😀

Are you happy that twitter choose photobucket for photo storage ?

7 thoughts on “Now Upload Images on Twitter , thanks to PhotoBucket”