The earlier versions of Ubuntu , Kubuntu and Fedora were shipping free CD’s worldwide of beta and final product OS but this time , there was a straight no and the ShipIt programme have now finally run its course . I was still expecting a bunch of organizations offering first thousand or atleast first hundred lucky free Ubuntu CD’s but that was not what happened . After waiting for some 10 days i finally left the idea of ordering the “free cd with free shipping” and upgraded my ubutnu online . Took just 40 minutes or so 😛

Lots of things are new in the Ubuntu 11.04 Natty Narwhal installer. 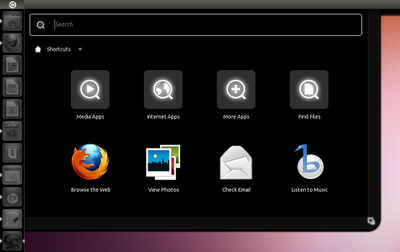 Finding and launching applications have never been easier, thanks to the new ‘Dash’ introduced in Ubuntu 11.04 Natty Narwhal. What you need to do is just Hit the Super key, type only the first few letters of the application you are looking for and Dash/Lenses will do the rest(while Super + a activates Application Lense, Super + f activates Files and Folder Lense). To make things even easier, you can now drag and drop applications into the Unity Launcher directly from Dash 😀

The much-needed ratings and reviews support is finally added which will hopefully make the process of finding good applications a lot more easier. There are other subtle improvements as well. Like, after you install an application, Software Center will ask whether you want to add that application into the Unity Launcher or not.

Ubuntu 11.04 doesn’t come with GNOME 3 / GNOME Shell (in fact it’s not even available in the repositories but only in a PPA) and instead it comes with an interface designed especially for Ubuntu called Unity (based on GNOME 2.x). Unity was already default in Ubuntu 10.10 netbook edition but besides being default for the desktop edition (the netbook edition doesn’t exist anymore starting with 11.04), it was also completely re-written and now uses Compiz.

That means you can use Compiz with Unity / Ubuntu 11.04 and in fact Unity needs Compiz to run.

To configure Unity you must use CompizConfig Settings Manager which is not installed by default (search for it in the Ubuntu Software Center). In CompizConfig Settings Manager you’ll find a “Unity” plugin under which you can tweak the Unity launcher reveal mode screen corner to trigger it (the Unity launcher is set to “dodge windows” by default), change some various keyboard shortcuts as well as some experimental, more advanced features like panel opacity, launcher icon size .

Ubuntu classic is a  retreat mode for computers not able to run Unity and for those who don’t want to use Unity ! One of my friend having a 10-year-old PC and no graphic card and who was able to run Ubuntu 10.10  superfast now cannot use the new features in this new updated version .

Also, if you have resemblance to my “that” friend where your hardware cannot run Unity, you will see the classic Ubuntu desktop instead of Unity once you log in ! So there’s no reason to worry 🙂

The Classic Ubuntu session in Ubuntu 11.04 Natty Narwhal looks basically the same as in Ubuntu 10.10: two GNOME panels, the same menu, no AppMenu by default with the default applications with the exception of Rhythmbox and OpenOffice ! 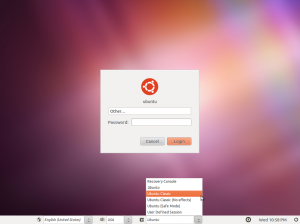 Now if you’ve installed Ubuntu 11.04 beta or beta and you daily update your Ubuntu then cheers ! You already have the final Ubuntu 11.04 version 😀 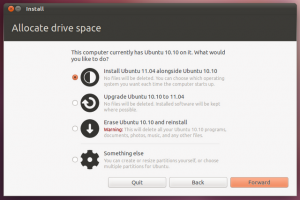 On the other side if you are using old version then  choose the Upgrade Ubuntu (2nd option) or Install 11.04 alongside 10.10 (1st one ) unless you want both of the OS’s to thrive together 😛

Have you updated your Ubuntu ?

Like it / Hate it ? Let us know via your comments 😀