Now make your home a theatre and forget the pirated prints of new Hindi movies because here comes the YouTube’s theater right on your desktops . The world’s top video sharing service YouTube has announced the launch of new channel dubbed as YouTube Box Office exclusively for Indian movies. 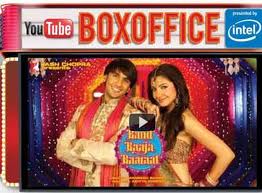 The Google subsidiary has tied up with Intel to sponsor the movies on its new YouTube Box Office channel in return for advertising on the site and video advertisements during movies. The chip maker – Intel is promotingits second-generation Core i3, i5, and i7 processors on the channel under an agreement that will last three months but can be renewed.

The channel will offer one blockbuster movie every month plus also has a collection of some 1,500 other Indian movies, to which YouTube is adding more and more titles. It is upto viewers to choose movies at resolutions ranging from 260p to high-definition (HD) 1080p, depending on the amount of Internet bandwidth they have available.
India’s Hindi film industry – Bollywood, continues to be the biggest entertainer and money moker in the country. YouTube plans to make advertisement revenue-sharing agreements with content providers. It also said other advertisers were interested in sponsorship deals. YouTube is fifth most popular website in the country according to traffic monitoring service Alexa. YouTube has already partnered with other popular news and entertainment channels in India to offer their content on the video-sharing site in return for shared advertising revenue.

However viewers outside India are prevented from watching the movies through IP (Internet protocol) address blocking at the request of content providers . This can be easily tricked by using VPN and anyone can be able to watch

The new YouTube Indian channel also offers videos including making of the film, selected & deleted scenes, and quizzes and contests.