Mozilla Firefox 4 and its Cool Features 22

Finally ! Firefox 4 has been launched officially by Mozilla . The new Firefox 4 version required some 8 months after its first beta release unlike chrome which delivers new version month after month from chrome 8 to 9 to 10 and now 11 ! The launch comes eight days after Microsoft IE 9’s official launch and voilà the chrome beta too was updated that same day 😛

I too updated my firefox and was too glad about its advancements . It now comes with rich and refreshed user interface , offers some opera like features , boasts of  dramatic speed,  and wide support of modern web technologies  .  One of the most noticeable change in new Firefox is its User Interface which is styled like chrome . You can now easily drag them and pluck them out into separate window just like opera . They  can be pinned to stay in the tab even after closing the Browser. This feature is called as Application Tabs. Here are the features worth noticing and reasons to again change your default browser from chrome to Firefox 😛

Tabs are now given top visual priority for intuitive browsing . More effective way to manage your add-ons and discover new options for personalizing your browsing . You are now given a permanent home to frequently visited sites like Web mail, Twitter, Facebook, Flickr etc . Also , the Switch to Tab is helpful to easily find and switch to any open tab from your Awesome Bar without opening duplicate tabs.

This is just awesome and Chrome taken feature that lets you access your Awesome Bar history, bookmarks, open tabs, passwords and form data across multiple computers and mobile devices . Mozilla Firefox 4 Release Candidate for Android and Maemo is now Available too ! What could be the most important feature other than this one ? 😀 Also the Do Not Track feature is a good move towards a universal standard and it allows users to opt-out of tracking used for behavioral advertising .

The new updated JavaScript engine incorporates the new JagerMonkey JIT compiler, along with enhancements to the existing TraceMonkey JIT and SpiderMonkey’s interpreter for faster page-load speed and better performance of Web apps and games . 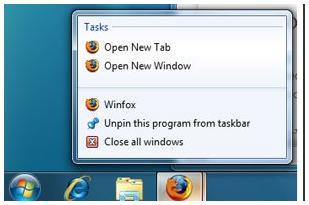 Another great feature addition is the tab management called as Firefox Panorama which acts as a raw browser task manager incase browser gets hanged . Pressing  Ctrl+Shift+E will open all your tabs systematically in thumbnail form which makes easier navigation to a particular one. You can even create groups of tabs and perform a plenty of mass operations on it.

Firefox now integrates multi-touch support for Windows 7, enabling users to interact with their browser in a new way .

The new product was put into several cycles of production , a clear indication of how much Mozilla is involved in its development.  Though the new Firefox 4 is faster than its predecessor , it still gets badly beaten by Google Chrome. Also when any addon is installed/uninstalled , you will be prompted to restart the browser in order to make the changes take place .

Users running Firefox 3.5 or 3.6 can download the latest version by selecting “Check for updates” from the Help menu. While users running Firefox 4 RC, need not download anything as Mozilla deems that build identical to the final. Firefox 4 is available for Windows, Mac OS X and Linux in more than 80 languages.

Will the new FF4 have that much of power to become your default browser ?

22 thoughts on “Mozilla Firefox 4 and its Cool Features”