In-case you are hearing “orkut” first time then here is it – A Googler named Büyükkökten from the nation of Turkey created Google’s first official social network. Since his last name was fairly hard to pronounce , Google decided to name their new social network after his first name, Orkut instead .
Despite the fact that it miserably failed just like google wave to succeed , Orkut somehow later on took off in both Brazil and India – where still its loyal and people prefer to use orkut than facebook or myspace .

This feature do looks like a spam , when you will start getting heaps of these [repeated] scraps from your friends and other people !  There were many tweaks and hacks available from many scripts but now every one of them are disabled  . Now you can send scraps to your friends straight from your homepage in orkut. And more ” you can send the same scrap to many people at the same time or even to all your friends”. Can now save a lot of time instead of copy-pasting 🙂

It is now possible to choose the privacy level you want for your messages , updates , photos etc .  Now you can send a private scrap to a group and only they can see and reply !

If you choose public then anyone can check your update , similarly friends of friends is another privacy feature going with same strength like facebook and myspace !

Interaction with your groups of friends is more flexible and easy as now you can open them from your homepage.

Just check the top of the page where you will see Everyone , Family , etc – the groups you have created . When you click a group (for example, “School friends“), you will now see updates, photos, videos and activities only from people who are part of that group.

Now any game and app which you access from facebook and myspace , bebo etc will be available  in orkut like Mafiawars , farmville etc . Also now,  a special section is available in sidebar just below your communities for easy accessing of games and applications . Now even applications have pages now.

Here are my favorite orkut apps 😉 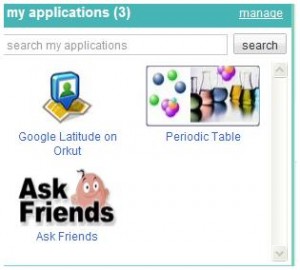 Even now  The apps directory page has been available where in you can easily open or remove or explore your apps. And to add new apps, now you can search for them within the apps categories.

If you are orkut addict then Do read More tools on orkut to make orkutting better .

However , these new changes might not be visible to every orkutian ! Its handed out in bunch but this time , there are no invites for that .

Patience ! You will soon see them …..

I was am still an orkut fan but i visit it once in  a month because  i am addicted to facebook . None can match or stand up with facebook 8)

Are you still using orkut ? Are new Features available to you ? 🙂